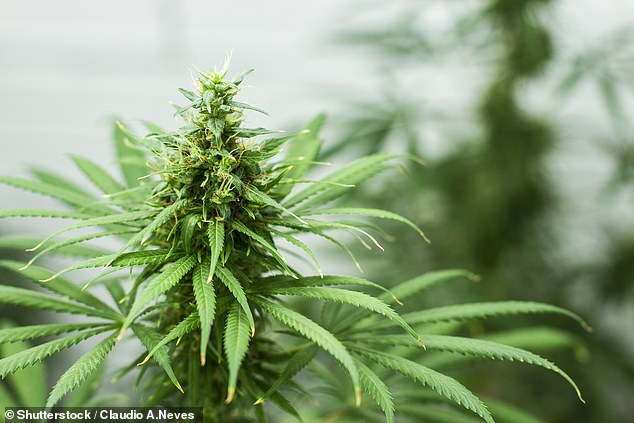 In Great Britain around 20,000 people currently have a “cannabis card”, which effectively decriminalizes the drug for medical users.

Around three and a half million people with health problems are eligible for the Cancard under the private scheme that was introduced last November.

People with illnesses such as cancer, depression, epilepsy, and multiple sclerosis can apply for the £ 20 card from their family doctor without a prescription for the drug.

The card identifies its holder as a “Registered Medical Cannabis Patient”, which prevents them from being hit with a fine or five-year prison sentence for buying cannabis for medical purposes.

The program’s organizers claim that 96 percent of users stopped by the police escaped arrest based on the card without a prescription, reports The Times.

Patients who have been permitted to use medicinal cannabis for their illnesses will not be arrested if they are holders of the cancard, which is supported by police

Medical cannabis has been legal in the UK for two years. However, due to strict rules, only a handful of people have been given an NHS prescription.

It is currently believed that more than a million people in the UK are illegally buying cannabis to self-medicate.

The program was supported by the National Police Chiefs Council, which says officers were made aware of the cards, The Times reports.

Police chiefs said they were trying to make sure the card was not being exploited by organized crime.

Medical cannabis has been legal in the UK for two years, although few people have received an NHS prescription for the drug

Patients who use cannabis to relieve pain from their medical problems may be arrested for possession of the medicine.

Only a small number of people – believed to be fewer than 100 – have received an NHS prescription for medicinal cannabis since it was legalized in November 2018.

MEDICINAL CANNABIS: WHAT ARE THE RULES IN THE UK?

Medical cannabis has been subject to prescription in the UK since it was approved by the government in July 2018.

Doctors are able to prescribe marijuana-derived drugs, but the decision must be made by a specialist – not a general practitioner, according to government regulations.

At the time of the amendment to the law, Interior Minister Sajid Javid (2018-2019) said: “On the advice of two independent advisors, I have decided to reschedule cannabis medicines – that is, they will require prescription.

“This will help patients with exceptional clinical needs.”

Mr Javid added that it was “in no way a first step towards legalizing recreational cannabis”.

It came after he granted Alfie Dingley (then six) and Billy Caldwell (then twelve) an exceptional license to use cannabis for their epilepsy.

Some products that are claimed to be medicinal cannabis, such as CBD oil or hemp oil, can legally be purchased as dietary supplements at health food stores.

However, there is no guarantee that these will be of good quality or have any health benefits.

Epidiolex for children and adults with epilepsy, Nabilon for chemotherapy patients and Sativex for people with MS-related muscle spasticity are approved cannabis-based medicinal products.

All other cannabis-based drugs are not licensed and are often referred to as “specials”.

The decision to prescribe cannabis-derived drugs must be made by a specialist doctor – not a general practitioner, according to government regulations.

The cost of a private consultation has priced many out of the legal cannabis option. So they turn to illegal suppliers.

Another two million who don’t use the drug could be eligible for the card, the study said.

Those who do not have a prescription and are in possession of the drug face a five-year prison sentence and an unlimited fine. The dealer can expect 14 years in prison.

The cannabis card, also known as CanCard, only needs to be confirmed by the user’s general practitioner regarding its condition. There are people who need medical cannabis but cannot afford prescription assistance to avoid arrest.

Carly Barton, 33, a former university professor, came up with the idea for the program. At 24, she suffered a stroke that caused nerve damage that left her in constant pain.

She was prescribed opiates but was reassured. In desperation, she tried cannabis and found that she was pain free and could lead a productive life.

However, she couldn’t afford the £ 1,000 private recipe, so she decided to grow her own recipe as many others had decided to do. But the police ransacked her home and confiscated her plants.

Ms. Barton told The Times that the police were in “a difficult situation where the medical use of cannabis is being monitored”.

She said this led to ‘very vulnerable people who live in fear of the people who are used for their protection ”.

Another user of the Cancard, a young mother who uses a wheelchair, told the Times she was concerned when she was approached by police while she was vaping medical cannabis. However, when she showed the card to the officer, she said they were “nice” and the police were “there to help”.

Simon Kempton of the Police Federation previously told The Times: “Our members did not go to the police to imprison these people.

Carly Barton, 33, (pictured) a former university professor, came up with the idea for the program. At 24, she suffered a stroke that caused nerve damage that left her in constant pain

“This is an initiative that I support for a number of reasons. First and foremost, it gives officials information on which to base their decisions on whether or not to use discretion or to arrest a member of the public. ”

The decision to amend the cannabis-based medicine law in 2018 was in part a response to a quick review of the evidence by the chief medical officer.

It concluded that medicinal cannabis products could be effective for certain medical conditions, backed by compelling campaigns by families discussing how the treatment had helped their sick children.

A notable public campaign was led by a Northern Irish mother, Charlotte Caldwell, on behalf of her son Billy, now 15 years old.

The USPTO’s refusal to register Cannabis TMs harms the public

Bajans are responding to calls for investments in the medical cannabis...